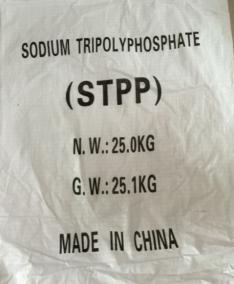 Sodium Tripolyphosphate belongs to inorganic salt chemicals as picture shows below, it looks as white powder(right) or granular (left)

STPP (Na5P3O10) were mostly used as one of the main auxiliaries for synthetic detergent; water softerner (mostly for the boiler); ceramic industry; tanning agent for leather making, auxiliary for dyeing; as an effective dispersion agent for suspensions of coatings, kaolin, magnesium oxide, calcium carbonate and drilling mud, etc; also it used as an oil contamination resistance agent in paper production. 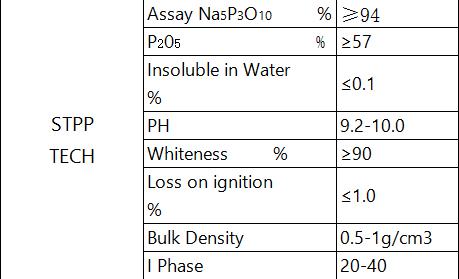 As specification shows above, we could produce the required index product as clients needed. Mostly, the main content for Na5P3O10 , P2O5,Insoluble in water , Fe and PH value were stable. The differences in final usage are Bulk density and I Phase.

For our product, Bulk density between 0.5-0.75 were present granular looking, it always used on ceramic products. After smash, it becomes powder and density were between 0.7-0.95 and we call it ‘high density’ mostly. As Phase I, detergent industry always need lower index like 20-30 cause the lower Phase I were be better in thermostabilization and its Hydration speed of their final product.